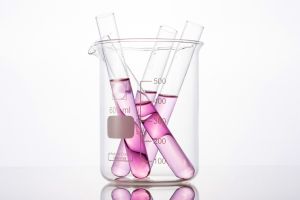 An emulsion which is stabilized by solid particles absorbing onto the interface between the two phases is called a pickering emulsion. The particles prevent coalescence of the droplets. The development of particulate emulsifiers is highly interesting with many advantages over conventional surfactant systems. Beneficial are the higher stability, better size control and lower toxicity. In this research area the application of chitosan for development of pickering emulsions is promising.

Modification of chitosan by introduction of hydrophobic groups is a good way to obtain water-soluble and amphiphilic molecules. Modified chitosans can be applied for production and stabilization of conventional and pickering emulsions. The vesicles of the pickering emulsions can serve as reaction vessels for enzymatic reactions, e.g. for production of pharmaceuticals, which could not occur in aqueous environments. The following study investigated the emulsification of oil by carboxymethylchitosan nanoparticles without application of cross-linking agents or sonication.

Carboxymethyl Chitosan and Its Hydrophobically Modified Derivative as pH-Switchable Emulsifiers.

Researchers from Finland and the US investigated the emulsification properties of carboxymethylchitosan (CMChi) and hydrophobically modified carboxymethylchitosan (h-CMChi) using dodecane as oil phase model. Emulsification properties were affected by the change in pH. Variations in pH between 6-10 and the oil/water ratio between 0.1-2.0 were considered. CMChi was synthesized from native chitosan using chloroacetic acid. The hydrophobic modification to h-CMChi was carried out with dodecanal.

Conclusion: The hydrophobic modification of carboxymethylchitosan increased the emulsification ability. The oppositely charged functional groups of modified and unmodified CMC allow particle-particle interaction, which significantly contributes to emulsification. The reversible emulsification of dodecanes by pH adjustment using CMChi and h-CMChi is possible.

Simple, reversible emulsion system switched by pH on the basis of chitosan without any hydrophobic modification.

Chitosan without hydrophobic modification is not a good emulsifier. Therefore, the authors have taken advantage of the pH-adjustable sol-gel transition of chitosan to develop a reversible Pickering emulsion system. Chitosan particles were formed by additon of 1M NaOH to an aqueous solution of chitosan (degree of deacetylation ≥90%, viscosity average molecular weight Mv = 6 x 104) with oil (pH>6). The chitosan particles stabilize the oil / water Pickering emulsion after homogenization. Addition of HCl lowers the pH (pH<6) and the chitosan is soluble in water, which results in demulsification. The authors tested four different oil phases (liquid paraffin, n-hexane, toluene, dichloromethane).

Conclusion: The use of the pH-controllable sol-gel transition for chitosan is a promising way to produce various reversible emulsions.