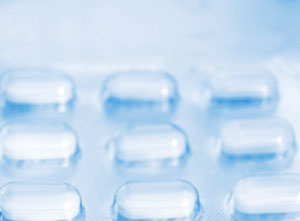 Due to its biocompatibility and ability to increase the water solubility of drugs, chitosan can be used as an excipient in drug delivery systems. In the following article, we present the influence of physical mixtures of the beta-blocker carvediol (CVD) and chitosan on CVD solubility and release profile.

CHITOSAN AS A USEFUL EXCIPIENT IN ORAL AND CUTANEOUS CARVEDIOL FORMULATIONS

CVD is an aryloxyalkylaminopropanol derivative and belongs to the beta-blockers. Beta-blockers are substances that act antagonistically on β1- and β2-adrenoreceptors and competitively inhibit the neurotransmitters adrenaline and noradrenaline. CVD is one of the most commonly prescribed agents for cardiovascular disease. It is characterized by low water solubility and high permeability through cell membranes.
In recent years, the importance of chitosan as an excipient for drug formulations has increased due to its biocompatibility, non-toxicity as well as biodegradability. Due to its cationic properties, chitosan can bind negatively charged active ingredients and modify their properties.
To prepare the chitosan CVD formulations, CVD and chitosan (80/500 and 80/1000) were ground together in different weight fractions. In this way, the particles were micronized under mild conditions.

The chitosan-CVD blends were investigated by powder X-ray diffraction, FT-IR and Raman spectroscopy, differential scanning calorimetry and scanning electron microscopy. It was found that the solubility of chitosan-CVD blends improved compared to pure CVD. When chitosans of higher viscosity were used, the solubility of the mixture decreased. It was also shown that the mixtures were purely physical, where no chemical bonding occurred between chitosan and CVD. The pharmacokinetic studies were evaluated by a new UHPLC-DAD method. The mixing of chitosan and CVD had no effect on the cellular permeability of the drug. The bioavailability of the mixture was 23%. The permeability of pure CVD and chitosan-CVD mixtures was also good for PAMPA skin models. However, when chitosan with higher viscosity was used, permeability through the membrane decreased.

Conclusion: Co-milling chitosan and CVD produced physical mixtures that exhibited better solubilities in water. In an in vitro model of the gastrointestinal tract, the use of chitosan and CVD in mass ratios of 1:1 and 1:5 improved the solubility of CVD. The chitosan-CVD blends also showed delayed drug release over a longer period of time, a property of chitosan that has also been highlighted in other studies. The present article demonstrates the potential of chitosan as an excipient for CVD in a modern drug delivery system for CVD.
Source: https://www.mdpi.com/1424-8247/14/8/712