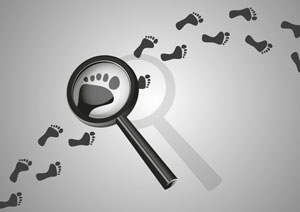 In microfluidic systems, analyses can be performed on a miniaturized scale without the use of complex laboratory equipment. In this context, DNA purification and concentration pose a particular challenge. To improve this, a disposable microfluidic device is functionalized with different chitosans for DNA binding in the presented study. This will then be used to detect eDNA of invasive species from river water samples.

The immigration of invasive species, such as the freshwater mussel Dreissena polymorpha, can trigger various economic and environmental problems. For example, the so-called zebra mussels clog sewage pipes or displace native species. For this reason it is important to detect their invasion in time. They can be detected for example by the presence of so-called environmental DNA (eDNA). eDNA is DNA extracted directly from environmental samples such as soil, salt water or fresh water. Sources of this DNA are e.g. feces, cadavers, germ cells or skin flakes.

DNA-based micro-total analysis systems (µTAS) can be an easy-to-use method for detecting DNA. Miniaturized analysis platforms have the advantages that they are, for example, portable and can be automated, do not require costly laboratory equipment, and there is less risk of contamination. However, full integration of all process steps often fails due to sample preparation. Especially due to the enormous diversity and complexity of samples from different sources, this is often difficult. In addition, highly fragmented DNA or contaminations complicate the process. Especially when identifying organisms via eDNA, the low concentrations pose a challenge.

In the presented paper, a disposable microfluidic device was designed for purification and concentration of eDNA. For this purpose, a microfluidic chamber was developed on which DNA was bound to PDMS (polydimethylsiloxane) microcolumns. To enable higher yields and pH-dependent DNA purification, these were functionalized with various chitosans. Due to the positive charge of the primary amines at low pH (below pKa 6.3-6.5), the negatively charged DNA can bind well there. In addition, in contrast to the use of silica for the concentration of DNA, chitosans have the advantage that no reagents need to be used which later interfere with the PCR. A total of three different chitosans were used for this purpose: Low molecular weight (LMW) chitosan (MW 50-190 kDa; DD 75-85 %), chitosan lactate (MW ≤ 5 kDa; DD > 90 %), Chitosan Oligomer (MW ≤ 5 kDa; DD ≥ 75 %). In this case, the chitosan oligomer originated from Heppe Medical Chitosan GmbH. Besides the type of chitosan, the influence of the concentration used and the duration of functionalization were also investigated. Subsequently, the optimized microfluidic device for the detection of eDNA of Dreissena polymorpha in river water samples was tested.

Conclusion
DNA binding and recovery in the mirofluidic system strongly depend on the selected chitosan. Due to the high DNA yield, the best result was obtained for 1% (w/v) chitosan oligomer with 1 h functionalization time. From the results, it was concluded that for optimal DNA concentration with chitosans, a compromise between good binding ability and recovery should be chosen. Overall, this approach succeeded in increasing the DNA concentration in the sample by 20-fold. Furthermore, it was shown that this method can be used to purify and concentrate even highly diluted eDNA from river water samples without prior pretreatment.