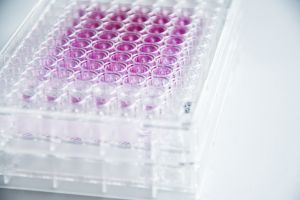 Chitosan and chitosan derivatives are promising biopolymers for nasal or vaginal drug delivery using micro- or nanoparticles. However, the pH-dependent solubility of chitosan and excessive water uptake in the presence of ions is suboptimal. Water uptake can result in rapid initial release of the drug due to collapse of the chitosan-based transport vehicle. To stabilize the drug release, research is being conducted to modify the polymer structure by physical crosslinking. Aim of the presented study was to investigate the influence of microparticle composition, in particular the amount of ion crosslinker (CF) introduced, on the release profile of water-soluble drugs from the chitosan matrix.

The authors from Poland prepared microparticles using chitosan glutamate and beta-glycerophosphate as ion crosslinkers by spray drying. The microparticles were filled with water-soluble zidovudine and optimized in terms of drug loading and release behavior. Zidovudine is a water-soluble, anti-retroviral drug used in HIV-infected patients.

It was investigated whether the crosslinking ratio has an influence on the properties of the microparticles. Zidovudine is released continuously over a long period of time after an initial explosive release. The initial release can be influenced by the degree of crosslinking. The second release phase is determined by the drug diffusion from the swollen polymer matrix and is related to the drug loading.

Conclusion: The study was able to identify a suitable ratio of polymer and ion crosslinker, but further optimization studies are needed to improve the release from the chitosan microparticles.