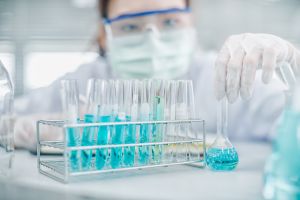 In recent decades, there have been major advances in regenerative medicine, such as the treatment of severe nerve injuries. Implants used as scaffolds for nerve cell regeneration are often made of biodegradable polymers, such as chitosan. Below, we present a study that investigated the degradation and stability of tubular chitosan-based implants.

The implants are designed to support the production of extracellular matrix by tissue cells in the area of injury. Lysozymes degrade chitosan implants by breaking down the chitosan into non-toxic oligosaccharides. The degradation rate is influenced by the molecular weight, the degree of deacetylation and the water content of the chitosan implant. Many studies already showed the positive effect of chitosan implants on nerve regeneration. The authors of the study prepared tubular hydrogels based on chitosan and investigated them in degradation and stability studies. Chitosan 85/100, 85/500 and 85/1000 by Heppe Medical Chitosan were used for the study.

The average molecular weight of the chitosans used was calculated using the intrinsic viscosity determined with an Ubbelohde viscosity. The implants were produced by electrodeposition. For this purpose, the chitosans were dissolved together with hydroxyapatite in a solution of hyaluronic acid and lactic acid.

By using the different chitosans, tubular implants with different wall thicknesses were produced. The obtained implants were incubated in phosphate buffered solution (pH 7.4) with or without lysozymes for up to 56 days at 37°C. The chemical, physical and mechanical properties of the implants were studied and evaluated after this treatment. In addition, the in vitro biocompatibility of the implants was evaluated with mHippoE-18 embryonic hippocampal cells and THP1-XBlue™ monocytes.

Conclusion: The use of a suitable chitosan could customize the properties of implants for regeneration of peripheral nerve injuries depending on the injury size and type.